Check out our latest podcast!

Register Login
< Back to Resources 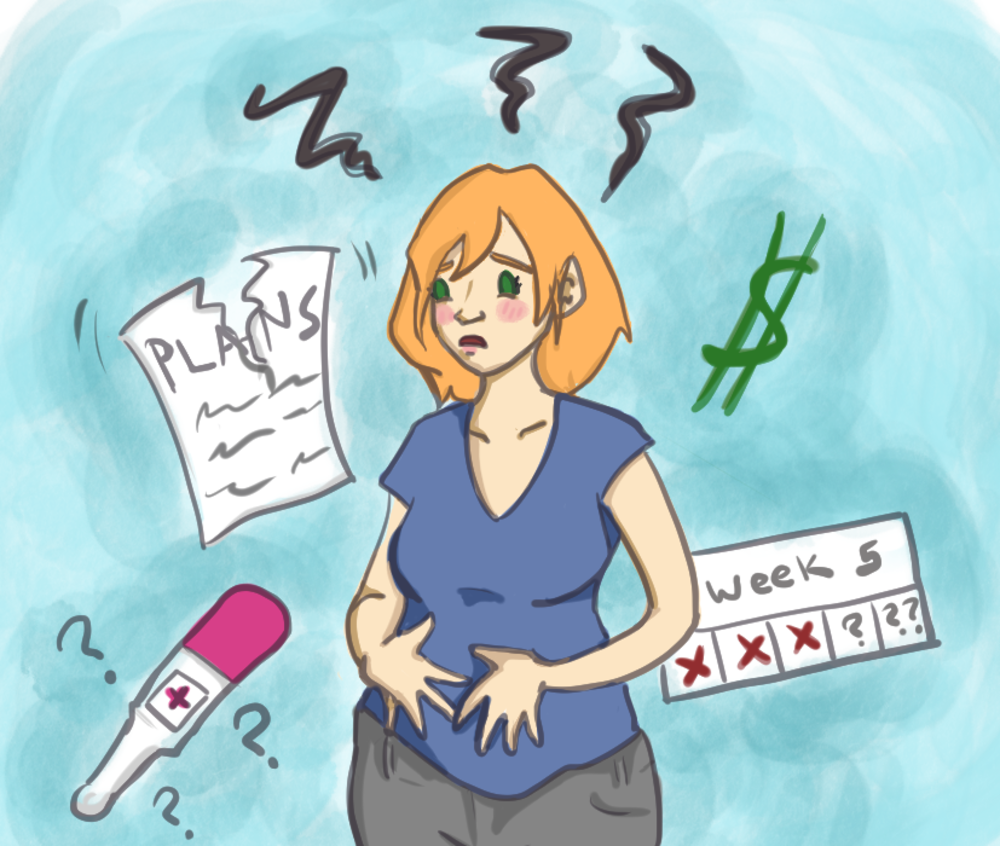 In the last 48 hours I went from absolutely dreading the idea of having a little human inside me to loving every single layer of that little cell that is my baby. I know saying "I dreaded the idea of having a baby" seems insensitive… people try for years and years to have a baby and here I am dreading the accident that just happened. Lets talk about that… the dread I felt. I felt guilty,  so guilty that I didn't want this baby. I have seen first hand the infertility struggles as one of my favorite humans in the world, my sister, went through it for a few years. I saw how hard it was for her to have miscarriage after miscarriage and take shots to just try and have a baby. But… why did I feel guilty? This is my body and my life. My plans are being disrupted…  I had a plan, I always have a plan. In one year we were going to have our student loan payed off. After that we would travel and do all the things we haven't been able to do because of the loan. After a few years of traveling we would find a house and start trying to have kids. That was the plan… this was not the plan. I should be allowed to feel what I want right? So why are so many women shamed for not wanting the baby inside them? I can empathize with women struggling to get pregnant, but that does not take away the panic, insecurities, and dread that I felt.

I was alone when I found out, my husband was at work so I panic called all the females in my phone that I trusted and luckily my sister answered. She was SO excited… but I wasn't. It kind of annoyed me that she was happy because I didn't want this. Yet, she has been trying for months to have another baby. I wanted to be told that it was ok to be upset. I knew I wouldn't be upset for forever. I just wanted time to be mad… After getting off the phone with my sister I realized I would have to tell my husband… the husband that was counting on our plan even more than I was. I felt like I was going to be sick to my stomach. I suddenly felt like I let my husband down. I was supposed to tracking my cycle and making sure we were using contraceptives when needed. It was MY fault.

I went into a state of shock that I honestly did not come out of until the day after. When he got home I was so nervous. Even though I new he was going to be shocked a little part of me was expecting this amazing reaction where he swept me up and we cried, because that's what I see in the media. I mean that same morning he told me that he wanted to have babies with me. Don’t get me wrong he was excited. But what those announcement videos don't show is the after shock where you finally realize what this actually means. He was so overwhelmed and when he told me he was "processing" I immediately thought he did not want this baby and that he was mad at me. I had so much anxiety. I took four more tests and again just to makes sure… all positive. I kept asking my husband if he was ok, he told me he was "processing" still. I got more anxious. It was a vicious cycle. I was mad at him for not being excited… but I also wasn’t excited. Why was I mad that he was processing? He should just want this and be excited… because that is what happens in every announcement video I watch. I was allowed to feel dread, but he wasn't. It was a cold couple of days as we both processed everything.

So now that we have talked about the absolute dread I felt, lets talk about the immense love I feel for three layers of cells that are my baby. After coming out of the shock of it all I realized that If I were to lose this baby I would be so upset. Which was the first time I realized that I did want this baby. It was like a blink of the eye and suddenly this baby was everything. I finally got it. I got why women who miscarry early are still just as upset as someone who miscarries at 12 weeks. This isn't just a cluster of cells. This is a future that I want. The smell of a newborn, people fawning over you making sure you're ok, holding the baby for the first time. It is more than the pain of losing a baby, it’s the pain of not getting to see this baby grow up. Not getting to pick a name, decorate a nursery. It is so much more than loosing some cells implanted in your uterus. A long with the love I now feel, comes SO much worry. I am constantly checking the pregnancy tests and taking new ones to make sure the lines are still there. I'm nervous to tell family too soon. I have lost sleep already at the idea of going to the doctors in 4 weeks to find out that there is no baby. What is that? Why is there so much anxiety with being pregnant. Once you make it out of the time frame where miscarriage is higher you are suddenly worrying that the baby will have a heart condition or will have a disability. It never stops after that. It is so overwhelming that part of me feels like I can't be happy until I see that baby on the screen at the first ultrasound. But it will never stop, after the first ultrasound it will be the second. So why not just be happy? If only it were that easy. Especially as a first time mom, I have no idea what to expect.

Something that I have come to realize is that a lot of women feel like they have to keep pregnancy a secret until they are 12 or more weeks along.  I understand that for most people it is a personal choice, but I also see how the world responds to women who announce their pregnancies early. I have seen several people post on social media that they are pregnant within a couple days of finding out. I have also seen those people post that they lost their baby not even a week later. I have seen those grieving mamas reach out for words of encouragement only to be told that it would be easier next time if they waited until after their first couple of ultrasounds to announce it. Miscarriage's run in my family and still all I wanted to do was tell people! We had told my entire family by four days after we found out and the response I got after the excitement was "How far long are you? Oh, only 5 weeks, so still very early." The tone change was palpable. It was like they couldn’t be as excited until I was what they believe is far enough along to not be worried about losing the baby. I haven't been given a lot of unsolicited advice, but I have been greeted with "Oh, you're still so early." In my mind I am going to be just as excited about this at 6 weeks as I am at 25 weeks. It got me thinking what can we do to change how we view the first few weeks of pregnancy? That is going to be a topic that I talk about a lot. The taboos of pregnancy. Because this is my first I have never experienced these things. Which is why Tales Of A New Mom is going to be very raw and real. I am seeing these things for the first time and I am going to write all about them!

Please let us send you awesome pregnancy and birth stuff!

We won't share your email with anyone and you can opt out anytime!

See something amiss on this page?